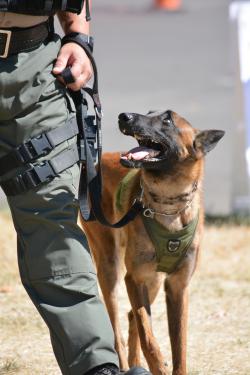 Canines (K-9s) are an important tool for law enforcement. Their sense of smell is many times greater than that of a human. No machine in the world can match a K-9s scenting capabilities. With their noses, they can assist their handlers in locating hidden suspects and possible evidence left behind at the scene of a crime.

With their loud barking they are also a wonderful deterrent. Often just the presence of the dog results in the peaceful surrender of suspects who might otherwise fight or attempt to flee from Deputies.

The Deputy and their dog live, train, and deploy together. They go through extensive training on a regular basis. Annually, they are certified by the Oregon Police Canine Association.

K-9 Deputy Vortex was purchased from Israeli Police Dogs International in May 2016 as a 3-year-old. He was partnered with Deputy Weikel who has over 10 years of experience as a patrol dog handler. Vortex is a brown German Shepard. He was untitled when the Sheriff's Office purchased him so he went through extensive training prior to being placed into service as a tracking/apprehension dog.

K-9 Deputy Brutus is a Belgian Malinois. He was partnered with Deputy Gevatosky in April 2017. Like Vortex, Brutus has been certified by the Oregon Police Canine Association as a tracking/apprehension dog.

K-9 Deputy Tommy joined the Benton County Sheriff's Office in May 2017. He was partnered with Deputy Blaser. Tommy is a mixed breed Springer Spaniel who was pre-trained in the detection of Cocaine, Methamphetamine, and Heroin and has maintained his drug detection certification. Deputy Blaser has previous experience as a K-9 drug detection handler.

The BCSO K-9 teams are used for tracking, trailing, wind scenting, building searches, locating evidence or suspects of a crime, and for the protection of law enforcement officers or other persons. The dogs are transported in specially-equipped K-9 patrol vehicles. These vehicles can maintain air conditioning or heat while the vehicle is parked.

Patrol K-9s are not used for search and rescue of missing persons. Our Region Three/K-9 SAR Search and Rescue Unit has specially trained dogs for this type of search.