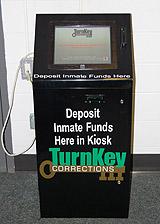 We understand that you may have a loved one incarcerated that you would like to show support for. Unfortunately we are limited in what we can allow. We cannot accept any mail or personal property from the public other than the following:

Mail must go through the USPS. There are times when we will accept clothing for trial for those inmates who do not have suitable attire. Any item brought in for an inmate becomes their property upon receipt. You can deposit funds on an inmate's account with which they can purchase snacks, writing materials, hygiene items, haircuts, phone cards, etc. Once money is deposited on an inmate's account it becomes their property. Inmates who do not have any money are provided with hygiene items regardless of their ability to pay.

Inmates housed in the Benton County Jail will not be permitted to release property or funds without approval from the Jail Manager. The Manager may, upon verification of an emergency situation authorize the release of some or all of the funds or property an inmate has in their possession at the time.

Intentionally bringing contraband into a jail is a felony under Oregon Law. Persons smuggling weapons, drugs, tobacco or any other prohibited item in the jail are subject to arrest and prosecution.

Bail generally means that the full amount of money must be posted in order for the defendant to be released from custody. If the defendant shows up for all subsequent court appearances, the money is returned to the person who posted it, less any administrative charge the court may impose.

Security Release is part of ORS 135.265 and generally means that ten percent of the full bail amount must be posted in order for the defendant to be released from custody. If the defendant fails to appear in subsequent court appearances, they can be:

Even if the defendant shows up for all court appearances, the court will keep 15 percent of the posted security release amount as an "administrative charge."

Due to the high fees associated with the service, the Benton County Jail will no longer accept Credit or Debit cards for bail.  Should you wish to use a credit card to post bail for an inmate you may do so during business hours at the Benton County Courthouse.  The Courthouse is located directly south of the jail at 120 NW 4th St.

Bail in the form of cash only may be posted at the Jail at anytime 24/7 for local Benton County charges and for other jurisdictions.

Due to the inability to ensure quality control, the following will NOT be accepted:

Bail/Security for out-of-county charges will be accepted in accordance with that jurisdiction's policy. Please check with jail staff.