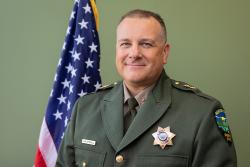 The Benton County Board of Commissioners unanimously appointed Jef Van Arsdall to the position of Sheriff on March 15, 2021.

Sheriff Van Arsdall was raised on the Oregon coast, graduating from Seaside High School in 1990. Sheriff Van Arsdall graduated from Portland State University in 1995 with a BS in Administration of Justice and moved to Corvallis upon graduation. He and his wife, Raeann (OSU class of 96) have two children and have been married for over 26 years.

When Sheriff Van Arsdall wasn’t wearing his official Corvallis Police hat, he could be found coaching youth and volunteering his time at the Albany Boys and Girls Club and the Albany YMCA.

In his free time, Sheriff Van Arsdall enjoys spending time with his family, coaching, being outdoors and attending a variety of sporting events.