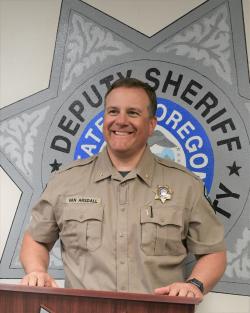 This website is designed to share with you the many ways the Benton County Sheriff's Office is actively enhancing community livability.

Community Notification "Steven Thompson"
Legal Status:  Thompson will be released from the Department of Corrections on 4/30/21, and will be supervised on Post-Prison Supervision for 36 months for Attempted Robbery in the First Degree. Read More

April is Distracted Driving Awareness Month
Results from extra traffic patrols from March 2021, and upcoming patrols in April/May 2021
The Benton County Sheriff’s Office worked extra patrols throughout the month of March.  During regular patrols and extra patrols (funded by grants) in March 2021, the sheriff’s office had the following activity levels measured in citations and arrests.  Read More

Community Notification "Gabriel Anthony Ramos"
Legal Status:  Ramos was released from the Department of Corrections on 4/2/21.  He will be supervised on Post-Prison Supervision until 4/1/24, for Sexual Abuse in the Second Degree, Assault in the Fourth Degree, Coercion, and Criminal Driving While Suspended or Revoked. Read More

Washington State Man Pleads Guilty After Traveling Across State Lines for Sex with a Minor
A Vancouver, Washington man pleaded guilty on March 30, 2021,to attempted coercion and enticement of a minor. Daniel Baldie, 34, sent emails and text messages to a Benton County Deputy, posing as a 13-year-old girl. Read More