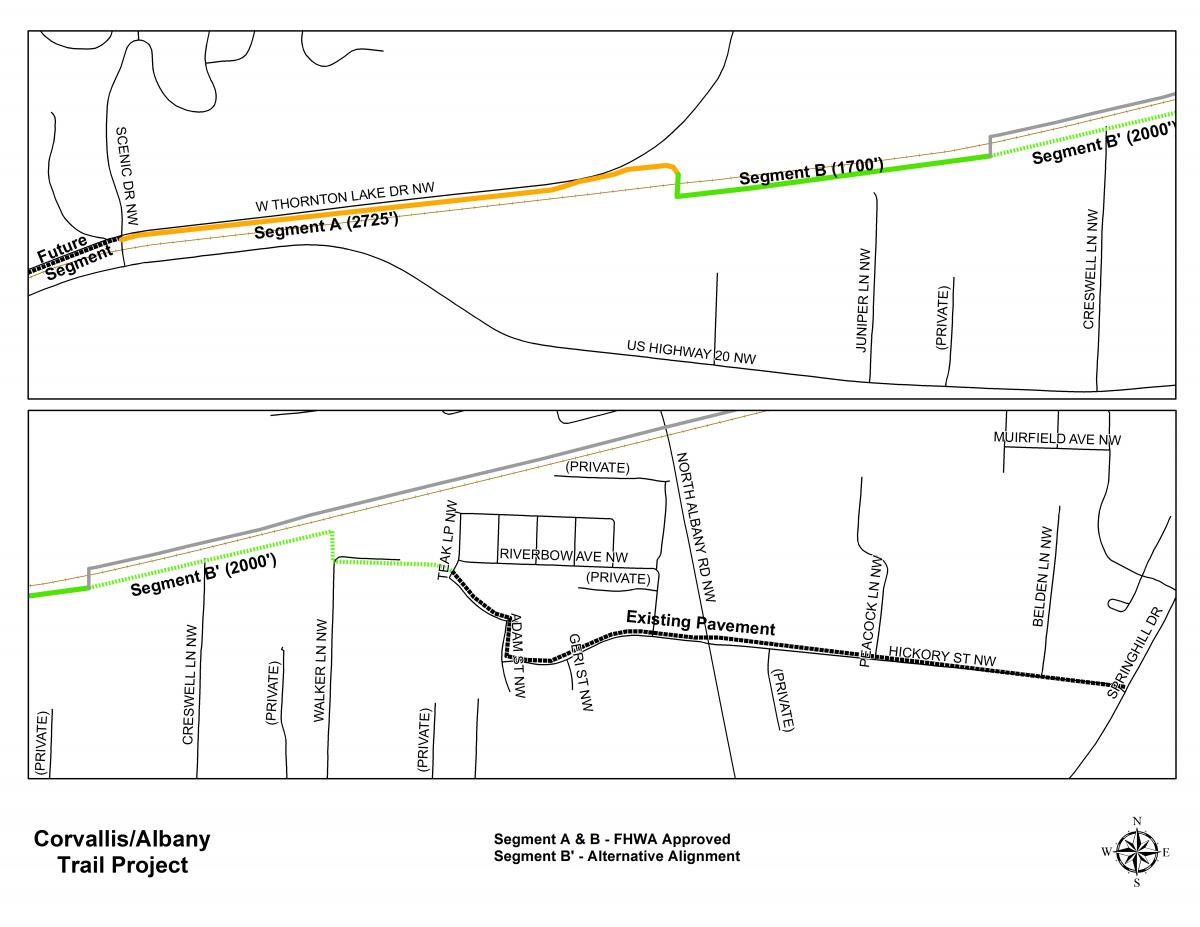 Project Background: Since the early 2000's, Benton County has been working towards constructing a multi-use path between the communities of Corvallis and Albany.  The only bicycle and pedestrian routes that exist between the two cities are high volume, arterial state highways that have high-speed traffic, inadequate shoulder widths, and hazardous intersections.  In North Albany there is no facility that encourages residents to walk or bike to schools, commercial areas, or work.  The only major direct connection between Scenic Drive and Springhill Drive is Highway 20.  Most neighborhood residents find this option hazardous and end up driving to their destinations.

Project Details: This project is finalizing the Corvallis-Albany Trail design specifically on the segment in North Albany that was started as part of the parent project.  The multi-use path will be ten to twelve feet wide starting at West Thornton Lake Drive, cross under the Union Pacific Railroad to the south side of the tracks, and continue to the east roughly parallel with the railroad where it will connect to existing bike lanes on Hickory Street.  A bridge will also be constructed over the West Thornton Lake slough.

Project Status: In 2017, ODOT hired David Evans and Associates to complete the survey, design, environmental permits, right-of-way appraisals and acquisition, and take the project to construction in 2019.  Due to unforeseen circumstances, the construction schedule has been extended.  The consultant is currently completing property appraisals with right-of-way acquisition as the next step.  Construction is now tentatively scheduled to begin in summer or fall of 2020.

Project Funding: Benton County and the City of Albany jointly applied for Multimodal Transportation Enhancement Program (MTEP)funding from the Oregon Department of Transportation (ODOT) in 2013.  The grant was awarded and the search for a consultant began in 2016.  The County is contributing $123,179 in match and the City of Albany is contributing $304,500 in match dollars.  The County also transferred $202,522 in previously award Flexible Funds to this segment of the project.

At Your Service Every Day