Skip to main content
County offices will be closed Thursday, November 24 in observance of the Thanksgiving holiday... 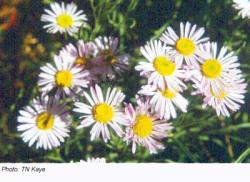 Willamette daisy is a small (15-60 cm tall) perennial forb in the sunflower family (Asteraceae). It has small, pale blue-lavender daisy-like flowers perched atop clusters of gray-green, grass-like leaves. Flowers are produced in June and July.

This species produces seeds in July and August, and can also spread vegetatively. The leaves of Willamette daisy appear similar to those of another member of the sunflower family, Hall's aster (Aster hallii).

The two species can usually be differentiated based on the color of their stems; Hall's aster has a reddish stem, while Willamette daisy does not.

This species is currently found only in the Willamette River Basin, and is primarily known to occur in Lane County, Oregon. Willamette daisy was thought to be extinct between 1934-1980, but is now known from approximately 30 sites in Benton, Lane, Linn, Marion and Polk Counties.

Remaining populations of Willamette daisy are at risk from: