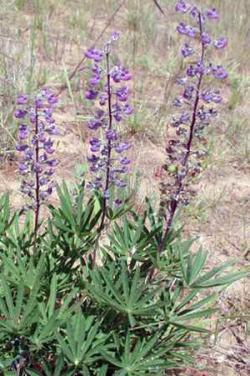 Kincaid’s Lupine is a long-lived perennial forb species in the pea family (Fabaceae). It has palmately compound leaves clustered at the base of single, unbranched stems, and produces unbranched inflorescence of whitish-purplish to tan flowers.

Kincaid’s Lupine reproduces by seed and by extensive vegetative spread.

Kincaid’s Lupine is a native species of prairies of southwestern Washington, the Willamette Valley, and forest openings and meadow gaps in Douglas County, Oregon.

Within the Willamette Valley, Kincaid’s Lupine is a host plant for the endangered Fender’s Blue butterfly, making conservation of the lupine important for the lupine as well as the insect.

Although there are no known sightings of Fender’s Blue in Douglas County, it is not known whether the two species co-occurred historically in that area.

Remaining populations of Kincaid's lupine are at risk from: