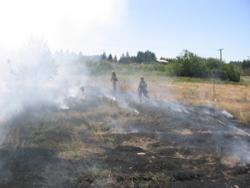 What lands are classified as forestland is important because that determines where within the district the Oregon Department of Forestry (ODF) has fire protection responsibilities.

Since its inception in the 1930s, Oregon's forestland classification system has evolved in response to changes in land uses and markets, as well as social and political pressures and events. Discussion of where ODF should or should not be providing wildfire protection, and who should pay for this protection, has been going on for decades.

These issues have come to the fore in recent decades with expensive and dangerous fires in forest interface subdivisions throughout the state, and as rapid expansion and development of Wildland-Urban Interface (WUI) areas makes ODF involvement in these areas increasingly complicated and costly.

While rural fire departments have expertise in dealing with fires in structures, many times they lack the resources and expertise to protect the millions of dollars of trees and other valuable natural resources adjacent to these homes and other buildings.

The Oregon Department of Forestry's forestland classification system originated with the passage of the Forest Land Classification Act by Oregon Legislature in 1937. By the 1950s, the system had been adopted statewide with significant regional variation in interpretation and application.

Many things have changed in the past 70 years. Land use patterns and the wildfire protection environment are much different today. Benton County's population has increased, and development patterns have changed.

People are building homes and living in rural areas among flammable vegetation that can sustain and carry fire. These Wildland-Urban Interface (WUI) areas, containing a mix of flammable vegetation and private homes, now cover large portions of the forest protection district. As a consequence of these trends, the complexity and costs of ODF fire protection program escalate. Many of the conditions under which ODF's forestland classification system was originally established seventy years ago, no longer apply.

In response to frequent issues and questions arising with classification efforts, ODF in 2007 formally initiated a thorough review of the statutes, rules and policy that make up its forestland classification framework.

Key goals of this review were to update the classification system to reflect current conditions, and identify ways to improve the efficiency and consistency of its administration. One of the outcomes of this review has led to a Forestland Classification review of all lands in Benton County within ODF's West Oregon District boundary (map of Benton County's ODF Protection District Boundary pending).

The review is being conducted by a County Forestland Classification Committee, as authorized under Oregon Revised Statute (ORS) 526, and the West Oregon District of the ODF.